Success in UP PCS is not my destination, it’s just a beginning; says Dr. Rama Mishra (selected as Commercial Tax Officer)

Facing some hitches in preparation for Civil Services Examination; A bit of Advice

General Studies Preparation: Your observation, analyzing and interpretation skills are at test

Civil Services Examination: What to do when scene on the whole doesn’t seem manageable?

Civil Services Examination: What to do when scene on the whole doesn’t seem manageable?

What is adequate time duration for an effective Civil Services Examination preparation? 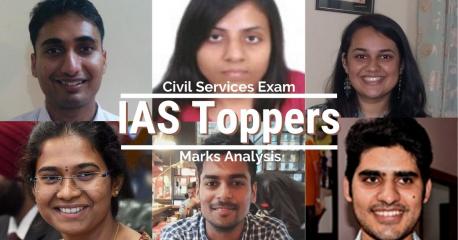 A glance at the marks secured by 1st rankers in last six year reveal their performance.

This is an attempt to give you a fair idea about the marks they secured in Mains (Written) as well as at Interview stage.

In the analysis while the General Studies score have contributed; in all the toppers aggregate the major impact has come from Optional Subject marks.

The marks obtained by successful candidates at top most rank at various stages of examination depict the complete picture about their performance in Civil Services Examination.

The biggest take away is that after initial blip with CSE 2013, toppers marks gives an indication that now, candidates are having fair idea about the new pattern and now it has more or less become stable particularly in last three years.

First, Look at the Cut-off

Although Ira’s written marks 920 were the highest score in Main Examination (Written) 2014, similar is the case for Tina Dabi with 868 marks. Kanishak Kataria also has scored highest marks 942 marks.

As far as Gaurav Agrawal’s written marks are concerned, you can’t take it lightly as he topped the examination that was with completely new pattern for Main Examination.

Yes, in Civil Services Examination 2013, there was lot of uncertainty and perplexity among candidates.

In case of Tina Dabi, it has been Optional Subject Political Science & International Relations (299) and Interview marks (195 marks) that helped.

The significance of Interview marks is clearly visible in result of Gaurav Agrawal, Tina Dabi and Nandini K R. Their Personality Test marks are much above the average that helped them in securing first rank.

However, dominance of marks obtained in Main Examination (Written) is evident in Kanishak Kataria,  Durishetty Anudeep and Ira Singhal’s result.

Keeping in mind cut-off, Tina and Nandini’s score are a balanced one; while in Ira Singhal’s case it was Main Examination (Written) marks that helped her top and something similar is witnessed with Kanishak Kataria and Durishetty Anudeep.