Focus on Your Goals, Instead of Your Fears; says Chandrajyoti Singh (AIR 28; CSE 2019)

Believe in Self and Constant Support from Family and Friends worked for me; says Vishakha Yadav (AIR 6; CSE 2019)

With hard work and perseverance, you can surely achieve what you want; says Shubham Bansal (AIR 43; CSE 2019)

I feel really fortunate that I could get real solutions to the challenges, I faced; says Kanchan (AIR 35; CSE 2019)

I learnt to believe in my dreams and keep pushing myself; says Abhishek Augustya (AIR 38; CSE 2019)

It was beyond my imagination to see my name cemented to a single-digit rank; says Ravi Jain (AIR 9; CSE 2019) 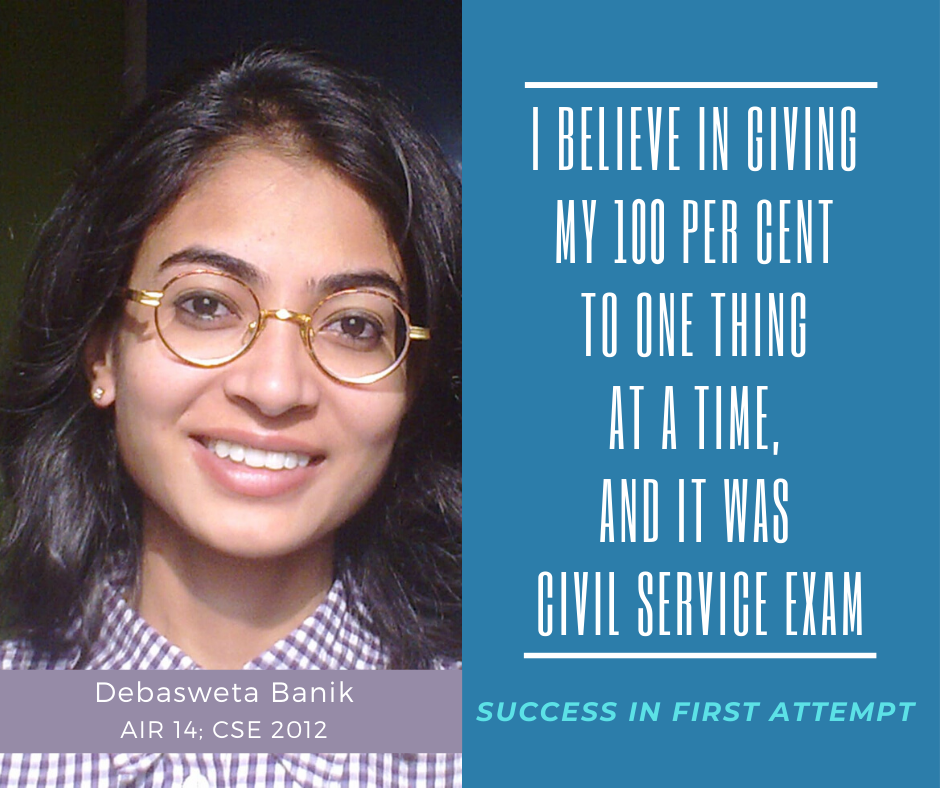 She secured 14th rank in the merit-list.

For her, it looked easy as before commencing study-plan, she was clear in her preparation strategies and had tried to adhere to all the targets she fixed for herself.

To accomplish her childhood dream to become IAS, after graduating from Delhi University in 2011, Debasweta Banik commenced serious preparation for Civil Services Examination - the mother of all examinations as it is called.

“As I had just completed graduation, I was seriously glued to Civil Services Examination preparation. This was my very first attempt and I kept telling myself throughout that this attempt should turn out to be my last. I should work accordingly so that I get my desired top rank in the first attempt itself” said elated Debasweta Banik, one of the youngest candidates to become IAS this year.

At an age when a majority of candidates start thinking about taking a plunge, Debasweta was clear about her goal as she said, “I did not seek out any career opportunity apart from the Civil Services."

Complete focus on the GOAL

I believe in giving my 100% to one thing at a time, and was preparing for civil Services Examination with single minded focus.

In fact, I did not even appear for any entrance exam for Masters in Economics as earlier planned.

I did not think of any ‘Plan-B’ because I was determined to succeed in my ultimate goal” she added.

Cracking this examination in first attempt is not a child’s play. She knew it well and accordingly charted her moves carefully.

Although, she graduated in Economics; but, her optional subjects were Anthropology and Psychology as she had keen interest in both the subjects.

She didn’t need any external help as her elder sister Subhasweta, a Gold Medalist in M.Sc. Anthropology from Delhi University, proved to be a mentor for her.

Groundwork for Civil Services Examination preparation was complete while she was doing graduation and got inspired by the success-stories she read.

She said, “Reading about toppers gave me an opportunity to get to know their varied styles of preparation which aided me to customize a method of study which suited me best.”

Debasweta's preparation strategy was clear and simple – strictly follow the syllabus given by UPSC; and she just relied upon standard textbooks in all the areas.

Being an avid reader of newspapers, she found it comfortable in handling the pressure. Actually, it was part of her preparation strategy to counter General Studies paper.

Sharing intricacies about her preparation-plan, she said, “I had decided beforehand that I would not take any coaching during my preparation and this decision helped me save a lot of time and energy.”

Talking about the importance of time management for this examination she said that it requires a minute planning and a rough timetable for all the stages of the examination.

Sticking to the targets and meeting these objectives on day-to-day basis can help in managing time well during preparation as well as while writing in examination-hall.

Expressing her gratitude towards her family, Debasweta said, “My father, mother and elder sister deserve all the credit for this brilliant success. They are the wind beneath my wings.”