Thinking of Career in Civil Services - Have an action-plan ready

While preparing for Civil Service Examination can your Academic Brilliance give some lift up?

IAS Exam - Dreaming Success; Anybody can Achieve Anything

IAS Exam - Dreaming Success; Anybody can Achieve Anything

Thinking of Career in Civil Services - Have an action-plan ready

IAS Preparation: Believe in self help you achieve whatever you want

IAS Preparation: 'Believe in self' help you achieve whatever you want 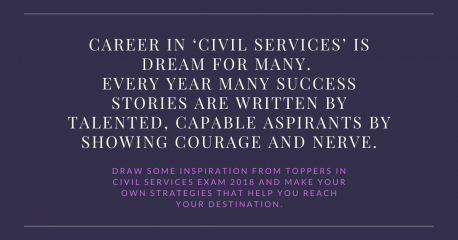 Career in ‘Civil Services’ is dream for many. Every year many success stories are written by talented, capable aspirants by showing courage and nerve.

It is time to draw some inspiration from toppers in Civil Services Examination 2018 and make your own strategies that help you reach your destination.

When you are looking at something big, you have to plan, work harder and smarter with a strong desire to reach your Goal.

In the society we live in, majority of educated and aspiring youth grow up with dream to be in the coveted Indian Administrative Service.

Even, for parents wish to see their kids to be successful in life and their widely held desire is to see children become IAS officers when they grow.

Every year, many talented and competent youngsters fulfil their as well as their parent’s wishes by achieving success in Civil Services Examination. Some of the successful candidates with top ranks go on to accomplish their dream and make career in coveted Indian Administrative Services (IAS).

For many Civil Services Examination remains a puzzle; while for some, it is sort of worship and they make all efforts to convert their dreams into reality.

Most of these focused candidates achieve success in the very first attempt; but, in case they are not able to make it to the merit-list in first attempt or were not able to get high ranks enough to get IAS; they go on to achieve it in their next attempt/attempts.

It is all about attitude and the way we convey message to our mind that reflects clearly in your behavior and even in outcome. The power of sub conscious mind plays its role and has significant influence in your life. Every year, lakhs of candidates commence their journey with a positive attitude towards dream career – IAS and make sincere efforts to convert their dreams in to reality.

The recent Civil Services Exam 2018 results showcase the new stars and a blink changed their status from ‘Aspirants’ to ‘Achievers’.

Success in Civil Services Exam is defined by 3Cs

Capability, Courage and commitment are the keyword in Civil Services Examination arena and reflect clearly in the CSE 2018 results

The result demonstrates how Kanishak Kataria (AIR 1, CSE 2018) accomplished his goal in very first encounter by showing unflinching faith and believe in his capabilities.

For Akshat Jain (AIR 2, CSE 2018) it was second attempt that helped him crack it and accomplished the goal. He took the first attempt immediately after graduation; so, it was only 2-3 months preparation and he found it tough to cross the first hurdle.

Look at Junaid Ahmed (AIR 3, CSE 2018) who got selected in her earlier attempt in IRS made it to IAS in this attempt.

Likewise, Shubham Gupta (AIR 6, CSE 2018) reached his destination in his fourth attempt. Though he got selected with CSE 2016 but got 366th rank that got him Indian Audit and Accounts Services.

Even, Tanmay Vashistha Sharma has sealed tenth spot for himself that ensures him post of IAS. In his earlier attempt, Tanmay got selected and got Indian Police Service (IPS). He is undergoing training at Sardar Vallabh Bhai Patel National Police Academy, Hyderabad.

For Vaishali Singh (AIR 8; CSE 2018), it was second attempt with CSE 2018 that gave her Rank 8. She couldn’t clear Preliminary Examination in first attempt; but, with planned hard work she achieved this brilliant success in her second attempt.

Gunjan Dwivedi (AIR 9; CSE 2018) couldn’t find the right strategy in her first two attempts and failed to cross the first hurdle. This time for CSE 2018 valuable advice came from one of her friends who helped her with planning for Preliminary Examination and after that she didn’t look back.

Every year many such success stories are written by talented, capable aspirants by showing courage and nerve.

It is all about grabbing the right opportunity at right time

When the crusade for career begins, everyone is optimistic about success but, many candidates perform below their potential, many carry an attitude of procrastination and lot of candidates succumb to pressure, difficulties and hurdles.

Among them there are a few who show a brave face to all problems and turn adversities in their favour and try to take control of all situation.

Being acquainted meticulously about their campaign, they face each stage of the examination knowing that each step has the potential to turn into something big.

“Where there is a will, there is a way”. Think that you have only one attempt and try to give your best.

Civil Services Examination preparation is a long journey and one who understands the nature of examination, standard it requires and amount of focused hard-work it necessitates, enjoy the journey which takes to your dream career IAS.

You have to make it meaningful…in other words productive which delivers positive outcome. 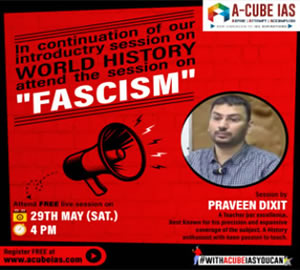 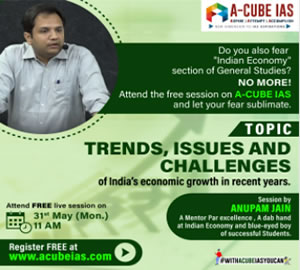